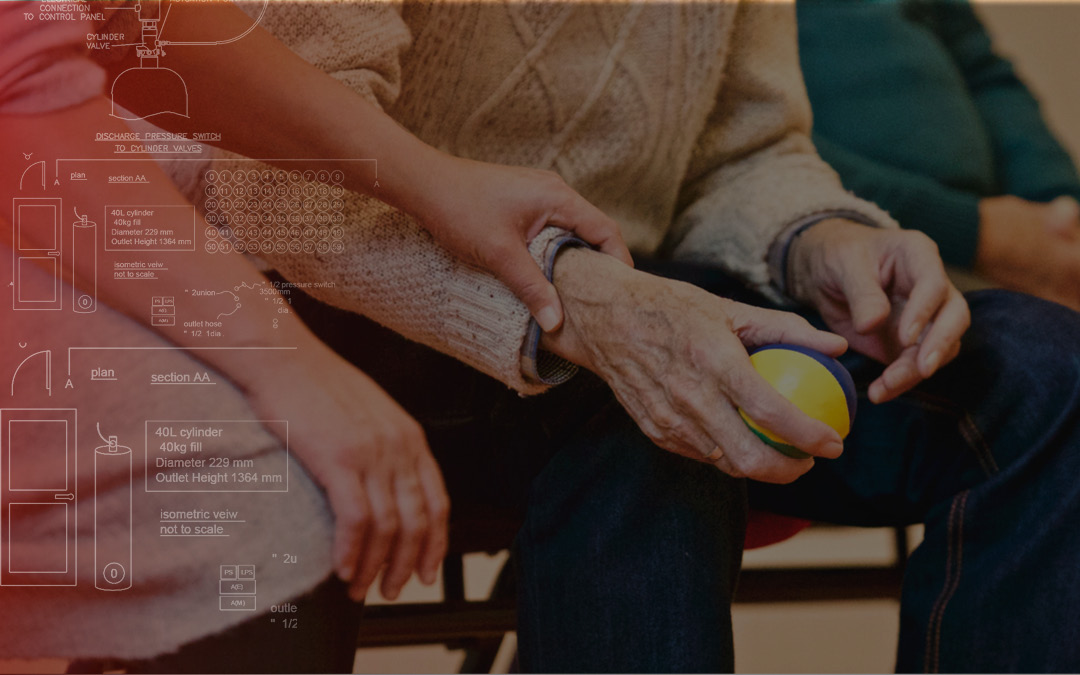 Cheshire Fire and Rescue Service were called to deal with a blaze engulfing a retirement home, which caused 150 elderly and disabled residents to be evacuated and the building to cave in. People living in houses nearby were also asked to leave, due to the risk the flames and smoke posed to their well-being.

The ferocity of the fire meant 16 fire crews were required from Cheshire, Staffordshire, Shropshire and Merseyside to be able to contain it. The fire crews were not only using the 1800 litres of water from each fire engine, but also water from the local brook and mains supply.

“I’ve done 29 years’ service in the FRS and I was extremely shocked [at the speed the fire took hold] there’s no other way of putting it,” … “I would not have expected the fire to go through this building as quickly as it did.”

The retirement’s home initial emergency plans were for residents to ‘stay put’, however the decision was taken by the fire commander to evacuate. This is overturn on procedure is likely to have saved many lives.

Despite the fire happening on the 8th August, Cheshire FRS only deemed it safe for road closures to be lifted and residents of the surrounding area to move back into their homes on the 13th August. Although the cause of the fire is not thought to have been deliberate, fire procedures that could have prevented this sheer volume of damage were not in place. Which leads to a question, what needs to be done to better equip buildings that house vulnerable people in the event of a fire?

Are the Policies Wrong?

The ‘stay put’ policy for the disabled and elderly residents in Crewe is not unusual. The amount of staff in comparison to residents is usually skewed, meaning removing residents from the building is very difficult. The high number of residents living in retirement homes also often have different issues making management of them during an emergency incredibly difficult. This may include: residents with poor mobility, those that require a lot of medication, others that are completely bedridden or have mental health problems.

“Such policies are commonplace and a recognised methodology in buildings that are designed to support them.”

The policies are there to execute the correct standard of care and keep the residents safe.  However, fires are notorious for behaving unexpectedly and so, residential homes cannot rely on one plan for all emergency situations. 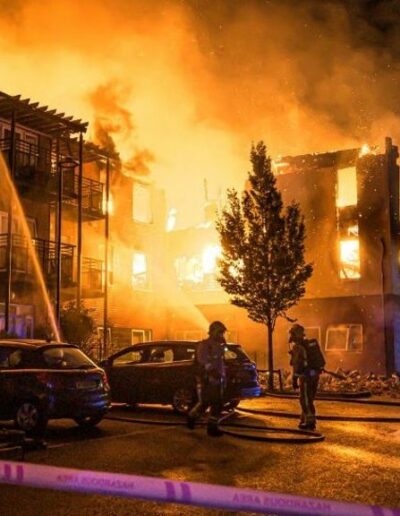 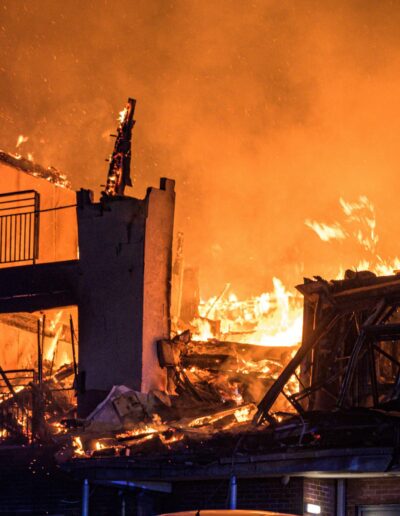 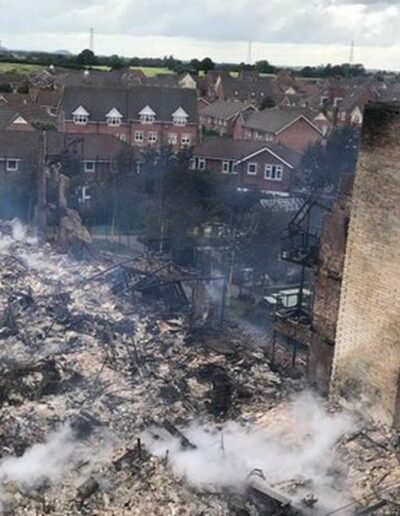 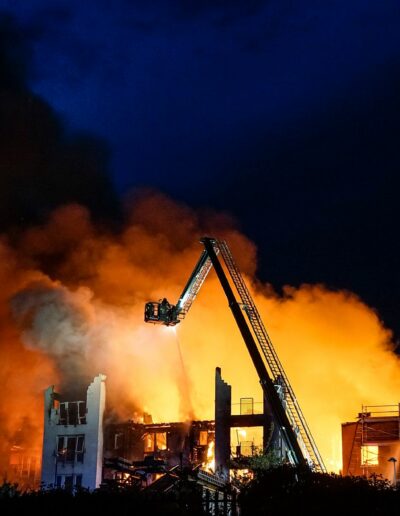 What should Retirement Homes be doing?

All retirement homes, where the main provision is to provide care, must follow the Regulatory Reform (Fire Safety) Order 2005. They are responsible for having an up to date fire risk assessment, which should be reviewed annually. When reviewing the risk assessment, it should be altered to reflect any changes to the premises or residents.

The general rule of thumb is to have two Class A fire extinguishers to every floor of the building, which put out wood and paper fires. Wet chemical extinguishers are required for the kitchen, additionally the premises may also need CO2 extinguisher in case of electrical fires and dry powder extinguisher for gas fires.

The 30 metre rule (British Standards (BS5306) applies to fire extinguishers, a person should never be more than 30 metres from the correct type of extinguisher on any level of the building.

Despite UK regulation saying sprinklers are not a requirement, they are a good fire safety option for properties that house vulnerable people.  They enable people to have more time to evacuate the building by reduce the speed in which flames spread.

Additionally, sprinklers have the added benefit of reducing the amount of damage to properties and therefore, incurring less repair costs and time where residents would be disrupted and out of a familiar setting.

They should be serviced no less than every 12 months by a competent employee or engineer.

To comply with safety regulations, retirement homes must also have in place an L1 fire alarm system, giving the building the highest level of coverage fire alarm systems can provide. This should be in place to increase the amount of evacuation time for staff and residents.

L1 systems provide automatic detection and should be in place in all rooms of the care home. This system should be serviced every 6 months by a fire alarm engineer and tested weekly by an employee. The premises should also always have a fire alarm service certificate and a logbook to keep track of when services have been carried out.

Fire doors are an effective safety measure to slow down and limit spread of fire, giving staff and residents more time to get out of the building.

Having these doors installed will help for horizontal evacuation, which is a good evacuation strategy for retirement homes in the event of fire.

All fire doors must close completely and be inspected four times a year and repaired if necessary.

Fire doors can be integrated with fire alarms, to automatically close if the alarm is raised. But this means they must be tested weekly along with your fire alarm. In this instance, doors can be kept open during the day, but should always be closed fully at night.

They can also be battery operated, which also enables the doors to be open during the day. They will close automatically when the alarm goes off. These automatic systems cannot be used for doors leading onto a staircase or any other exit.

Staff will require general fire training and know the exact evacuation procedure for residents in the event of fire.

Depending on the condition of the residents, simultaneous evacuation is one option, where everyone leaves the building at the same time.

However, if not all residents are mobile and incapable of evacuating themselves, horizontal evacuation is the better choice. This involves going room to room and gradually take residents out the building, which is aided by correctly installed and functioning fire doors.

Retirement home staff should be trained to use evacuation aids, including chairs and mattresses. Training should be given to all staff, whatever shift pattern they work. The logbook should also detail when this training was done.

What Do We Offer?

These fire safety methods with frequent servicing and reviewal of thorough fire risk assessments would significantly reduce risk of fire in retirement homes and in the event of fire, prevent fatalities and amount of damage to the property.

Through our divisions, we can provide a variety of services to health-care such as nursing homes customers, improving not only fire safety but can improve all aspects of building/office security.

Cannon are industry-recommended in supplying fire extinguishers and sprinklers for every business need, with the added addition of design, installation, maintenance, room integrity testing and refilling. If your property requires improved fire safety, read more here.

With over 30 years’ experience, Cannon Fire Protection has developed an excellent reputation within the fire protection industry throughout the United Kingdom and Europe. Independent auditing of our quality management systems, contracting and service operations ensures the very best provision of support in our sector. Cannon is part of the Asset Protection Group.